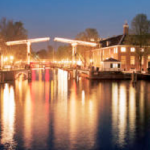 A few days ago I found myself addressing a national political party gathering in Switzerland, speaking about the biblical roots of Europe and Switzerland. It was rather bizarre to be telling stories about Swiss history to the Swiss!

One of the stories I told was about how Switzerland and Swiss people played a very key role in the birth of what has become the European Union. Today the Swiss are surrounded by the EU. It is the elephant in their backyard. They can’t ignore it. Neither are they ready to become part of it.
Soon after the Second World War, I recalled, Swiss families pooled their money to buy a large abandoned hotel above Montreaux, at the opposite end of Lake Leman from Geneva. This hotel became a centre for the reconciliation of the nations.
The Biblical message shared in word and deed at this centre had a very significant influence in creating a climate of forgiveness and reconciliation, particularly between French and German leaders, including Konrad Adenauer, who became the West German Chancellor, and Robert Schuman, the French Foreign Minister.
Democratic?
Both Schuman and Adenauer were devout believers. Both were convinced that post-war Europe had to be rebuilt on Christian foundations. Schuman wrote later that he believed democracy had to be Christian or it would become the tyranny of the majority. Schuman’s personal vision for Europe was of a community of peoples deeply rooted in Christian basic values. The European story was one deeply rooted in the Christian story. Cut off from those roots, Europe would lose the foundations for equality, human dignity, tolerance and compassion.
Schuman believed the way forward for Europe was to build political and economic structures at all levels–local, national and European–on the democratic principle of ‘loving your neighbour’ applied to states and peoples. This belief gave birth to what has become the EU.
Which is not to say that everything about the EU should be endorsed. Sometimes Swiss people explain to me almost apologetically why they voted against joining the EU, expecting me to be pro-EU. Actually, I think it is a good thing that right in the heart of the EU is a non-member nation that is the most democratic nation in the world! For the EU sometimes (perhaps often) suffers from a democratic deficit.
However, to ‘understand the times and know what Israel should do’ (I Chron. 12:32), we must recover perspectives on the past. And sadly, my experience is that there is much history we have lost. We have been robbed of our awareness of what God has done in Europe’s past. That loss often encourages a pessimistic, withdrawal mentality.
But where can we learn about God’s actions in Europe’s past? Where can we wrestle with issues about Europe today, about the EU, how to respond to Islam in Europe, secularism, new spirituality…?
Trails
We want to address this need through the Schuman Centre for European Studies. Starting October 28, the Evening School of European Studies will be held in Amsterdam on Thursday evenings every second week through to next April.
We are offering this course also via online participation, with pod- and videocasts, downloaded study materials and skype tutorials.
The aim of this course is to enable those with jobs or other study:
• to understand how the Bible’s message shaped European society;
• to explore biblical responses to major influences in Europe today, including secularism, Islam, new spirituality and the EU;
•  to investigate our task in shaping Europe’s future as ‘people of hope’.
The twelve evening sessions will be supplemented by three Saturday ‘historical trails’ in Utrecht, Amsterdam and from Dokkum to Deventer.
For more details of dates, content, costs, registration and how to participate online, go to:
www.schumancentre.eu/courses-events/study-courses/evening-courses
Join us in Amsterdam!.
Till next week,
Jeff Fountain

'Why do you believe?'