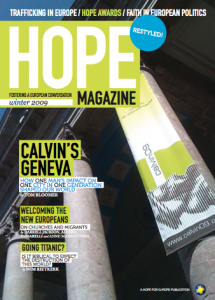 Sometimes I wonder how many magazines serve the Body of Christ in America, creating conversation and dialogue across the continent. I can think of quite a few off the top of my head. How many serve a similar function in Europe? I struggle to think of any.

Of course, the United States is just one nation, with one dominant language. That’s a great advantage. Denominations and movements are mostly structured nationally, and in the US that’s an advantage. In Europe, that is a disadvantage.

For since the Reformation, the Body of Christ has been territorialised. National churches emerged along with national identities. Today, many national conversations happen through national publications.

But in this season of growing European integration, how many pan-European magazines or papers are there? Even in the secular press, we have European ediitions of The Wall Street Journal, the International Herald Tribune, TIME and Newsweek, all American publications. But where are the European publications?

One attempt to promote such European conversation is HOPE Magazine, the voice of Hope for Europe, a movement of networks connecting Europeans with similar ministries and visions across national  borders.

After four pilot editions, we have relaunched HOPE Magazine in a new smaller but thicker format with a more contemporary look. Our aim is to foster conversation about Europe among European Christians.

Each edition attempts, firstly, to recover something of our forgotten Christian heritage. In the new edition, Tom Bloomer explains how the civic model pioneered by Calvin in Geneva shaped parliamentary governments in Holland, Scotland and England, and (via the Pilgrim Fathers and Puritans) in North America, and beyond.

Geneva was known as the smelliest city of Europe, writes Tom, who is provost of ywam’s University of the Nations,  and yet it was transformed into a city with global impact even today.

Calvin saw the need for a European conversation. His sermons were transcribed weekly, published and distributed immediately across borders, helping to spread his ideas especially into Holland, Scotland and England. Our lives have been impacted by the dialogue he started far more than we realise.

Tom will be speaking about Calvin’s impact on Geneva  this coming weekend at the From Reformation to Transformation conference organised by Campus for Christ, Switzerland. (See www.genevaleadershipforum.org).

Secondly, HOPE magazine addresses contemporary challenges facing us in Europe today. This edition challenges us to face up to our responsibilities to the New Europeans among us.

Some Christians unfortunately are being swayed by populist voices who equate Christian with being anti-Muslim. Jesus tells us to love our neighbours, who may of course be Muslims. Migration involves tough questions. The Bible says much about how to treat sojourners in our midst.

This past week I was asked to teach on this in Restenas, Sweden. I was reminded how crucial it is for us in YWAM and other missions, as well as in local churches everywhere, to recognise the unprecedented opportunities and responsibilities of current immigration developments.

The Mapping Migration report on which the HOPE magazine article is based is an excellent starting point for such reflection. (See novaresearch.eu/index.php/resources)

Thirdly, each HOPE magazine edition focusses on a future shaped by God’s unchanging character and plans, not today’s ephemeral headlines. Wim Rietkerk, of L’Abri International, takes on a few sacred cows in an interview challenging popular eschatology, by saying that this world will not just perish; it will be transformed. How we think about the future shapes the way we live in the present.

HOPE magazine will be published three times a year. As the editor, I invite you to subscribe on a donation basis, via our soon-to-be-active site www.HOPEmagazine.eu., and to join this European conversation.

Or email us directly and we’ll post it to you.

What is freedom (for)?