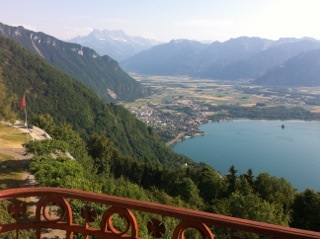 The view from the balcony has to be one of the most breathtaking in the world. But the conferees gathered in a circle by the panoramic windows of Caux Palace Hotel overlooking Lake Geneva early last Friday morning were not looking outward. Rather, they were looking inward, listening to the inner voice.

Caux Palace, also known as the Centre for the Reconciliation of the Nations, has been a place of meeting for people of all nationalities since the Second World War. Hundreds of German politicians, industrial leaders, trade unionists, journalists, church leaders and edcuationalist met their counterparts from former enemy nations to ask and receive forgiveness and to build foundations of trust for Europe’s future.
Our Continental Heritage Tour was planned to visit Caux last Friday en route to Geneva before turning north to head home to the Netherlands. I received an invitation to speak about Robert Schuman at a conference on reconciliation beginning the evening before at Caux called Addressing Europe’s Unfinished Business. As this dove-tailed quite neatly into our tour schedule, I had accepted the invitation.
The movement which owns and manages Caux Palace has operated under several names from its start in the 1920’s; firstly as the First Century Christian Fellowship (FCCF), then as the Oxford Group (OG), followed by Moral Re-Armament (MRA) and these days as Initiatives of Change (IofC).
Personal change
This global movement is committed to the transformation of society towards a just, peaceful and sustainable world, starting with personal change. The link between personal change and global change involves taking an honest look at one’s own motives and behaviour.
IofC, with its intergenerational, multicultural and interreligious diversity, encourages respectful listening to others, honest conversations and bridges of trust among peoples of different and even antagonisic backgrounds.
At the heart of its approach, the movement encourages the regular practice of silent listening to the inner voice–which some call seeking divine guidance, others the leading of conscience.
In earlier years, the slogan was often repeated, ‘When one listens, God speaks; when one obeys, God acts’. While IofC is a Christian-initiated movement, it has became a forum for people of all faiths and none.
Yet the practice of quiet meditation each day has clear Christian origins. Frank Buchman, the influential evangelist who founded the movement, was strongly influenced by Lutheran Pietism of the Halle school, which we had earlier visited on our tour. He also had a life-changing experience in Keswick, in the north of England, under the ministry of Jesse Penn-Lewis, after which he had felt a greater sense of the presence of the Holy Spirit in his life.
Another major influence on his life was the British Baptist, F.B. Meyer, author of The Secret of Guidance (1896). Meyer challenged Buchman personally on one occasion asking him if he really gave God enough uninterrupted time to tell him what to do. Buchman decided then to spend at least an hour every morning listening to God, initially from five to six o’clock. That began a life-long practice of ‘quiet times’ to seek God’s guidance. He encouraged others to talk to God for fifteen minutes and listen silently to him for forty-five. He also quoted St Francis de Sales that half an hour a day of listening to God was a basic minimum. However, for very busy people, a full hour was necessary!
Long meditation
The facilitator of our corporate ‘quiet time’ on Friday morning gave examples of others who practised prayerful meditation. I was surprised to hear a quotation being read from Francois Mitterand, former French president, giving the following tribute to Robert Schuman on the commemoration of the centenary of his birth on 25 June 1986: This discrete, modest man, inspired by his deep faith in God, demonstrated, when it was necessary, a resolve that nothing could deflect. When I was a member of his government, I saw him as he was, up early in the morning, starting his work in an office devoid of papers, after a long meditation that no-one dared disturb.
While Mitterand was clearly not a spiritual man, he had himself attended Caux conferences in the post-war years.
We were to see further evidence of Schuman’s personal spirituality two days later on our last leg of the Heritage Tour up through France when we stopped in the small village of Scy-Chazelles where his house is now a museum. The bookshelves in his home included books on spirituality and prayer. Like Buchman, who had encouraged the French foreign minister to listen to his heart when he was considering retirement from politics in 1948, Schuman found the practise of listening to divine guidance essential for his politics.
Schuman had obeyed that inner voice, stayed in politics, and shaped the modern history of Europe accordingly.
(See the video updates of the Heritage Tour on the Schuman Centre facebook page. )

0 responses to “Hearing the Inner Voice”