That invention–probably the most important event of the modern period–triggered the printing revolution with profound consequences for education, economics, science, politics and society.

Gutenburg lived in Strasbourg for at least a decade from 1434 and is said to have developed and perfected the art of printing there, although he did not print his first books until 1450 in his birthplace of Mainz.

The monument itself is a bronze statue of the inventor, with four bronze relief panels on the base. These depict scenarios of political liberation in America (with George Washington among others), the emancipation of slavery in Africa (with William Wilberforce and freed slaves–see photo), the proliferation of educational publications in Europe (with scholars including Erasmus, Milton and Rousseau), and of the spread of ideas in book form to Asia (with Brahmins and Chinese).

Gutenberg’s invention enabled the development of the Renaissance, the Reformation, the Age of Enlightenment and the scientific revolution. It led to mass communication, education for all and the modern knowledge-based economy. It overthrew the power of political and religious authorities. It shattered the monopoly of the elite on learning and fostered the emergence of the middle class.

Biblical illiteracy
Across Europe, it nurtured a cultural self-awareness of peoples and nationalism, and of the European vernacular languages, superceding Latin as the regal, legal and scholastic  language of discourse.

Not least of course, it led to the proliferation of the publication of the Bible in European (and other) languages and of that book’s influence in all spheres of European life. The Gutenberg Bible, published in 1454, was the first major book printed with movable type. The forty-eight existing copies are considered to be among the most valuable books in the world today.
Yet despite the role of Gutenberg’s invention in the spreading of both the Bible and education in general, today’s generation remains as biblically illiterate as their teachers’ generation. Few educated Europeans are aware of the all-pervasive influence the Bible has had on European life and culture, nor of the high esteem many Enlightenment thinkers, authors, rulers and scientists had for the Book of books.

Further away from the cathedral, towards the half-timbered houses of the medieval neighbourhood called Petite-France, we stumbled across a Protestant Church on our recent Heritage Tour with signs inviting passers-by inside to a Bible Exposition. A copy of the Gutenberg Bible was displayed prominently along with other old versions. Also on display was a microscopic version, 1245 pages on a surface of 30x27mm, identical to one placed on the moon by Apollo astronauts.

Biggest blessing
Offered free to take away were quotations from famous historical figures about the Bible. Some by reformers like Calvin and Luther were what we would expect to read. Others however from philosophers, scientists and politicians were more surprising.

Jean-Jacques Rousseau (1712-1778) happened to be a life-long reader of the Bible, the product of a ‘thorough if not strict’ Calvinist upbringing. “I acknowledge that the majesty of the Scriptures astonishes me, that the holiness of the Gospel speaks to my heart. Look at the books of the philosophers; with all their pomp, how little they appear at the side of the one book! Can a book so sublime, and yet so simple, be the work of man?”

Johan Wolfgang von Goethe (1749-1832) never failed to acknowledge his debt to the Bible: “May the world progress as much as it would, may human science develop at the highest degree, nothing will ever replace the Bible.”

Victor Hugo (1802-1885) declared: “There is a book that contains all the human wisdom in the light of God’s wisdom, a book that is called by the people THE BOOK, THE BIBLE… Sow the Gospel in the villages, a Bible per house.”

Even Friedrich Nietzsche (1844-1900), who despised Christianity as a religion for weaklings, admitted: “In the Jewish ‘Old Testament,’ the book of divine justice, there are human beings, things, and speeches in so grand a style that Greek and Indian literature have nothing to compare with it”.

Kant, Pascal, Dostoevsky, Napoleon, Lincoln, Churchill, Eisenhower... the list of famous names continued with quote after quote about the Bible being ‘the best gift God has ever given to man’, ‘the Holy Writings which even today light the way for man’s pilgrimage’, ‘the biggest blessing known to mankind’…

How tragic that modern Europeans have become ignorant of what Goethe called ‘the source of all culture and of all knowledge’. How ironic that Gutenberg’s invention has led to an education system which rejects its own roots! 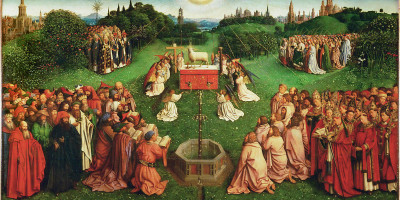