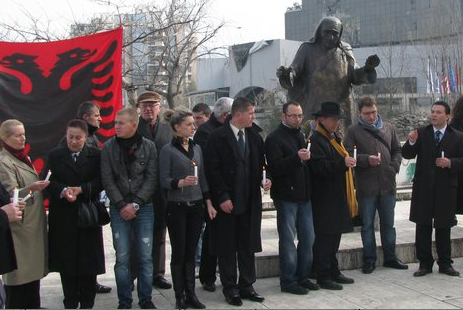 Totally overshadowed by the dramatic events in Tunisia and Egpyt, thousands of Albanians have also been taking to the streets in desperation for just and stable national leadership. Yesterday Christians initiated a Caravan of Peace which gathered in front of Mother Therea’s Monument in the square named after Albania’s most famous daughter.
Arian Galdini is a young Albanian politician who for years has been trying to raise a Christian voice in the public square in this country, which once proudly proclaimed itself the world’s first atheistic state.
In an effort to raise political awareness from a Christian perspective, he has organised speakers from abroad to  address social and public issues. I was his guest speaker in one such event held in the former home of the communist dictator Enver Hoxha.
The last time I met Arian was at the European Parliament Prayer Breakfast in Brussels. Galdini (on right in the photo) has also initiated national prayer breakfasts in Tirana to bring the nation’s top politicians together in a humble attitude of dependence on God.
Humility, however, is the last attitude being modelled presently in Albania by the conservative prime minister, Sali Berisha, and the socialist opposition leader, Edi Rama.
The nation has been polarised now for months as these two leaders have refused to dialogue and settle differences. The socialists accuse Berisha for rigging the 2009 national elections and demand his resignation.
Berisha (who was at the centre of Albania’s stormy upheavals around pyramid schemes in the late ’90’s) refuses to resign, and counter-accuses the opposition of attempting a coup d'etat.
Tensions have mounted over other allegations of governmental corruption and the opposition are calling for early elections.
Candles
The two leaders have taken their feud onto the streets, mobilising their followers in demonstrations and counter-demonstrations. Ten days ago three socialist supporters were shot dead by police.
On Friday, Rama led thousands of his followers (his sources say 200,000; police say 60,000) on a silent funeral march through the capital with candles and flowers and larger-than-life photos of the dead demonstrators.
The International Community, particularly officials from the European Union, the US State Department, and the Organisation for Security and Cooperation in Europe (OSCE) are concerned that Albania, as a democracy. a NATO member country, and aspiring EU member, needs to solve her own problems internally. After urgent calls from the international community for the leaders to de-escalate the tensions and to engage in dialogue to manage their differences, the president agreed to cancel a protest march of his own followers scheduled for Saturday.
Emotions
Arian meanwhile has tried to rally academics and  intellectuals, politicians and religious to drive a wedge for peace and calm between the two rival blocs. He has written articles for the main newspapers pleading for dialogue. He sent sms’s to Berisha and Rama urging them to follow the paths of peace and dialogue, without response.
President Bamir Topi called to offer his support for the Caravan of Peace, yet the total control of the media by the two strong leaders has discouraged Arian. In his view, the media whip up emotions which do not serve justice, truth, peace and interests of the Albanian People; only militants voices are being heard.
Despite the president’s support, yesterday’s Caravan of Peace was ignored by the media which seemed only interested in promoting one or other side of the conflict.
Arian has written to contacts outside of Albania asking for prayer and wisdom. Tomorrow he and some colleagues will meet with the president. After that the group plan to declare a Hunger Strike for Peace in front of the prime minister’s office. They expect the media to studiously ignore them, under orders from the strong men.
But they believe, as Christians, they must do what they can to be peacemakers. They ask for our prayer for peace and righteous government in their land. It’s the least we can do.
Till next week,
Jeff Fountain
©Jeff Fountain – Weekly Words are the personal reflections of Jeff Fountain and do not necessarily express the official position of YWAM or Hope for Europe.
They may be reproduced with due acknowledgment. Past WW's may be viewed and downloaded at: www.ywam.eu/weeklyword
To subscribe or unsubscribe go to www.schumancentre.eu/subscribe