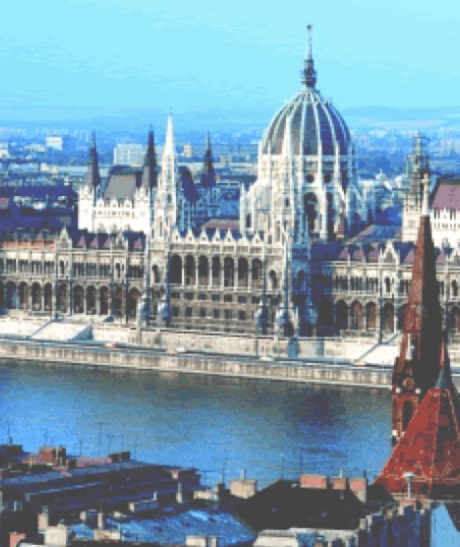 A friend called my wife recently to tell her we were completely on the wrong track. She had just been to hear a British healer-evangelist speaking in charismatic circles in our country lately, who apparently has been proclaiming that God has finished with Europe.
At least, that was the clear message our friend had picked up. She was concerned that we were wasting our lives on a fruitless mission. Well, I’m sure God is working through this man’s ministry, but that part of his message is the most effective way to paralyse the church and encourage Christians to withdraw from their responsibility to disciple our European nations.
I may be simple, but my starting point is that it is always God’s will for his will to be done–on earth, in Europe, as it is in heaven. It is never God’s wll for his will not to be done on earth. That’s why we can always say, there is hope!
In just over three months, the HOPE•II Congress will gather around 1000 leaders in Budapest to interact with some world-renowned thinkers, writers and speakers, as well as leading European speakers, in order to ‘understand the times and know what Israel should do’. The purpose is to convene leaders concerned with Europe’s future–which will depend on the action of God’s people. As history always does. For ultimately the flow of history, from a Kingdom perspective, depends on the obedience or disobedience of God’s people.
The history of Europe can be read as a love-hate relationship with God’s Word and its implications. We will always be in a battle for the future of this (and every other) continent.
False
In 1968, the sociologist Peter Berger wrote that ‘[by] the twenty-first century, religious believers are likely to be found only in small sects, huddled together to resist a worldwide secular culture’.
But thirty years later, in book significantly called The Desecularization of the World, he declared that the assumption that we live in a secularised world was false: The world today, with some exceptions…was as furiously religious as it ever was, he wrote, and in some places more so than ever.
‘Ah, but not in Europe!’ we’re told. Secularism intimidates us on every side, does it not? Dr Philip Jenkins, one of the HOPE•II congress plenary speakers, challenges that accepted theory. There may be more faith among the ruins than academics want to see, he implies, and quotes sociologist Grace Davie’s reference to ‘the fragility of European secularism.’ While dismally low church attendance and membership figures are used as the measure of faith in Europe, Jenkins and Davie point out that figures for belief in God, heaven, hell, the devil, resurrection still remain high across Europe. Low church attendance cannot simply be equated with pure secularism. There remains a residual Christian faith, a ‘believing without belonging’.
Jenkins, whose book ‘God’s Continent’ I rate as the best available overview on Europe today, will help us in Budapest grapple with those false assumptions about Europe that paralyse God’s people. In his book’s closing paragraph, he writes: ‘The recent despair over the fate of ‘God’s continent’ finds a good many historical precedents. Viewed over the centuries, perhaps the best indicator that Christianity is about to expand or revive is a widespread conviction that the religion is doomed or in its closing days.’ Death and resurrection are not just fundamental doctrines of Christianity, he concludes: they represent a historical model of the faith’s development.
HOPE•II is an opportunity to gain such perspectives of hope from those who see the ‘big picture’. Os Guinness will propose a constructive response to Europe’s crisis of faith and values, towards a new Christian renaissance. Michael Schluter, Vishal Mangalwadi, Prabhu Guptara, Andrew Walker and Darrell Jackson are among numerous specialists in various fields available to equip us as European leaders to ‘understand the times…’
For example, Davie’s ‘believing without belonging’ thesis must spur us to find appropriate fresh expressions of being and doing church. That is the focus of the church innovation network consultation during HOPE•II. Other church leaders will want the opportunity to look beyond their own church walls and interact with some of the above resource folk, to see with fresh eyes  what God is doing in Europe. There is a special consultation for such pastors and ministers.
Early bird
But HOPE•II is also for artists, childrens’ workers, urban workers, researchers, theologians, healthworkers, youth workers, women in leadership, worship leaders, workers with the disabled, those reaching out to the least reached in Europe, evangelists, environmentalists, bridge-builders to our muslim neighbours, African migrants in Europe, and more.
Politicians will also consult on issues like the rise of populism, responding to Islam, recovering Biblical values, hosted by Prof. Dr Roel Kuiper of the Dutch Senate. One consultation of special interest to me will be with educationalists on how to equip Europeans to think European; how to develop curriculum giving biblical perspectives on past, present and future. How ill-equipped we are to engage the issues is reflected in the paucity of courses in Europe offering Christian perspectives on European issues.
Opportunities like this don’t come every year where we really can engage with issues facing us today on a European level. The question perhaps is not, can we afford to attend? It may be, can we afford not to attend?
For further information go to www.hfe.org.
And the ‘early bird deadline’ headline above? Oh yes, discount fees apply for those who register before the end of this month! By next Monday.
So, till then,
Jeff Fountain
©Jeff Fountain – Weekly Words are the personal reflections of Jeff Fountain and do not necessarily express the official position of YWAM or Hope for Europe.
They may be reproduced with due acknowledgment. Past WW's may be viewed and downloaded at: www.ywam.eu/weeklyword
To subscribe or unsubscribe go to www.schumancentre.eu/subscribe