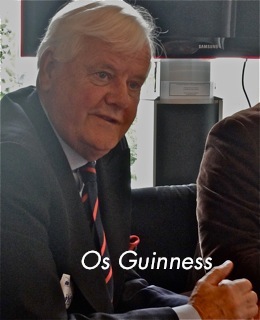 In our globalised world, where ‘everyone is now everywhere’, tensions over religion, worldview and ideology threaten the future of civilisation and make the emergence of a civil public square essential.
This threat prompted Dr Os Guinness and Profesosr Thomas Schirrmacher to launch the Global Charter of Conscience last week in the European Parliament building in Brussels, as a tool to put religious tolerance back in the centre of public debate.
The Charter affirms that freedom of thought, conscience and religion is a precious, fundamental and inalienable human right, and includes all ultimate beliefs and worldviews, whether supernatural or secular, transcendent or naturalistic.  (For full text and background information, see www.charterofconscience.org)
Recent infringements on freedom of conscience in western European nations are causing increasing alarm, as in case after case secular values violate fundamental freedoms.
Scottish midwives are being forced against their conscience to assist in abortions, while Norwegian doctors have been told by the ministry of health they cannot opt out of abortion duty. French pharmacists refusing to sell contraceptives have been told by the court that ethical or religious principles are not legitimate grounds for such refusal.
An English counsellor was sacked for ‘gross misconduct’ for conscientiously objecting to providing sex therapy to same-sex couples.
Dutch civil servants objecting to officiating over same-sex marriage ceremonies have been over-ruled by the Equal Treatment Commission, and told they should play an ‘exemplary role’ in combating discrimination’ or be dismissed.
A new Danish law legalising same-sex marriages will force churches to conduct the ceremonies.
Sacred, naked or civil
But as Os and Thomas explained in Brussels, this charter is not simply to protect Christians. It sets out a vision of ‘freedom of thought, conscience and religion’ for people of all faiths and none. In some parts of the world, as in much of the Muslim world, atheists have no freedom of conscience.
The call for a civil public square contrasts with two dominant models: the sacred public square, in which one particular religion dominates to the exclusion or denigration of other faiths or worldviews; and the naked public square where religions are excluded and secularism reigns.
Three-fourths of the world’s population live in countries lacking freedom of thought, conscience and religion–through government repression, sectarian violence or the culture wars of the west. While Article 18 of the Universal Declaration of Human Rights (UDHR) enshrines ‘freedom of thought, conscience and religion’ for all, this fundamental freedom has become neglected, misunderstood and embattled. Yet that freedom underpins all other freedoms, freedom of expression or of assembly, for example.
Habits
So, the authors of the Charter explained, the principles of Article 18 needed to be reaffirmed and contextualised within contemporary challenges. Therefore the Charter aimed to articulate the principles of civility: rights, responsibilities and respect. But declaration only was not enough, Os emphasised. It had to be followed up with legal implementation by a range of institutions and with civic education by parents, teachers and leaders in society, until these principles became ‘habits of the heart’, he said, using the famous phrase from Alexis de Tocqueville.
The Charter, which has been reviewed over the past three years by academics, politicians and NGO staff of many faiths and none, allowed everyone to be faithful to what they believed and to allow the dignity of difference, Os explained. Freedom of conscience protected believers, not beliefs, he explained, as the right to believe anything did not mean that anything anyone believed was right.
Dr Heiner Bielefeldt, UN Special Rapportteur on Freedom of Religion and Belief, warmly endorsed the Charter, saying it was timely, powerful and useful as this freedom was under threat today. Freedom of expression was being used to suppress freedom of conscience. The call for a global civic public square accessible to all but owned by noone was innovative and creative, he said.
Finnish MEP Sari Essayah hosted the launch of the Charter in Brussels, which will be repeated in Bonn and London.
Till next week,
Jeff Fountain

A tale of two cities