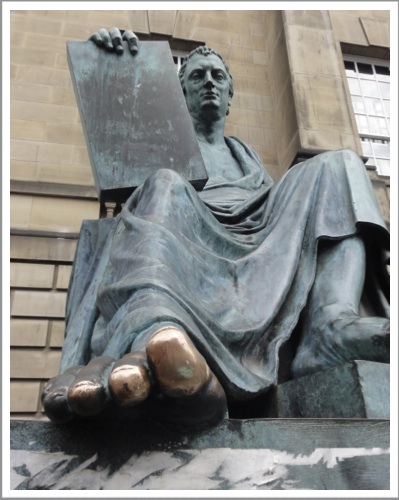 The Great Partnership between science and faith that we wrote about last week could be illustrated equally from the story of Edinburgh as from that of Cambridge. On our recent Celtic Heritage Tour, Paul James-Griffiths introduced this theme to us on our walk down the Royal Mile from Edinburgh Castle towards the Holyrood Palace.
As Paul explained it, the church founded Edinburgh University which in turn encouraged the study of science. Edinburgh has produced many scientists and physicists, and leaders in the worlds of medicine, education, social reform and the arts, who were devout Christians whose work was inspired by their faith.
Paul, dressed as the Celtic missionary St Cuthbert (see www.celtictour.org), began with the coming of the Christians to what we now call Scotland, Ninian being one of the first to buld a stone church north of Hadrian’s Wall in 397AD. Kentigern (Mungo) founded a church in what he called Glas-gu (beloved church). Glasgow’s motto still today is: Lord, let Glasgow flourish through the preaching of Thy Word and the praise of Thy Name). Later other Celtic missionaries came, like Columba, founder of Iona, Aidan and Cuthbert, who tradition claims used to preach close to where the castle is now.
Legacy
Centuries later, John Knox became the central figure of the Scottish Reformation, bringing insights from Calvin’s Geneva back to Edinburgh where Presbyterian church government became a model for a democratic Parliament. Paul quoted an historian saying about Knox, that ‘the ideal he gave Scotland as a legacy was of a democratic state, caring for its weakest members, with free education available to all.’
On the Continent, the Reformation paved the way for enquiry, investigation and freedom of conscience and speech, Paul explained, out of which emerged great pioneer scientists who were devout believers, including Kepler, Newton, Pascal, Boyle and Euler.
This tradition continued in Edinburgh, which produced believing scientists like John Napier (1550-1617), inventor of the logarithm; Thomas Young (1773-1829), who showed how light acted as a wave; Sir David Brewster (1781-1868) inventor of the kaleidoscope and who laid the foundation for laser technology; and James Clerk Maxwell (1831-1879) voted in 2010 as Scotland’s greatest scientist, and founder of Cambridge’s Cavendish Laboratory we mentioned last week.
There was however another side to Edinburgh, which became a centre for that revival of Greek philosophy called the Enlightenment. Edinburgh became known as ‘Athens of the North’. Two statues close to each other on the Royal Mile depict two sons of the city whose influence has been truly global. Adam Smith (1723-1815), capitalism’s founding father, was best friend to David Hume (1711-1776), himself known as the father-figure of the Enlightenment.
As we stood around the bronze image of Hume dressed in a Greek tunic, Paul pointed to the large tablet the philosopher held in one hand, his foot resting on the other. The sculptor had deliberately left the tablets blank, suggesting that the Ten Commandments were null and void. Hume himself had written in his Treatise that ‘all distinction betwixt virtue and vice is merely imaginary’; and, ‘Justice has no foundation further than it contributes to public advantage.’
Heresy
His further claims that adultery, while not always expedient, was very lawful, and that religion and its ministers were prejudicial to mankind, expressed his scepticism towards Christianity in particular. Often considered an atheist by contemporaries, Hume was not always consistent in what he wrote about religion, but was clearly unorthodox enough for the Church of Scotland to consider heresy charges.
The revival of ancient Greek philosophy led him to develop naturalistic explanations of the universe, without any need of a God, paving the way towards the modern era of unbelief.
As we stood listening to Paul, several young people approached the statue, rubbed their hands over Hume’s bronze toe, and disappeared back into the crowd. A tradition had developed among students, explained Paul, that to touch Hume’s toe brought good luck during exams. Well, something has to fill the spiritual vacuum.
Till next week,
Jeff Fountain