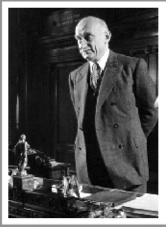 Your article last week in the Wall Street Journal predicted a ‘glorious revolution’ following the European elections next May. For a revival of national patriotism is going to bring solutions to Europe’s multiple problems.
Soon voters all over Europe are going to rebel at the ballot box in a great wave of ‘new patriotism’. They will thwart the plans of Robert Schuman and other Europhiles who have been bent on destroying Europe’s nations.
For, you argued, Schuman’s aim of European integration,‘to make war not only unthinkable but materially impossible’,  was based on the simply ridiculous notion that nations went to war because they were sovereign nations. No, you told your WSJ readers, nations went to war because they fell for totalitarian ideologies.
So which wars were you thinking of, Geert? The Crimean War? The Franco-Prussian war? The Boer War? The Great War? Wasn’t there a lot of misguided patriotism driving nations towards war at the start of last century? Serbs, Austrians, Germans, Brits… Gott Mit Uns, Rule Britannia! and all that? Yes, Germany fell for a totalitarian ideology leading to WWII–after allied ‘patriotism’ forced a vengeful Versailles settlement on their defeated foes, sowing seeds of resentment and opening the way for a dictator who promoted an extreme nationalistic patriotism.
So now you suggest that Europe will be saved through a resurgence of patriotic pride among the Germans, the Brits (do you also mean the Welsh and the Scots?), the French, the Croats, the Dutch (the Friesians too?) and the Belgians (the Wallonians and Flemish?)…
Backward
Are you really suggesting that the way forward is to go backward? Yet war among competing nations has been the default setting for Europe over centuries. In the 17th century, the continent enjoyed only four years of peace. Compare that to the almost seven decades of unprecedented peace we have enjoyed since the war.
Ah, but the EU didn’t bring peace and prosperity, you wrote. NATO did. Free trade did. True, NATO and the Marshall Plan were crucial factors in post-war reconstruction. Schuman was well aware of that as France’s Foreign Minister and as co-founder of NATO  But he also knew that a big stick alone did not nurture healthy international relations. NATO was hugely significant in preventing a Third World War with Soviet forces. But it was not the key for reconciliation among the western European nations.
NATO and the Marshall Plan were like the scaffolding on the outside of a building. What was needed was an internal change of heart, especially between France and Germany; a choice for humility, forgiveness and reconciliation, after centuries of rivalry fed by competing patriotisms.
Even during the war, after escaping from Nazi imprisonment, Schuman argued with his fellow country-men that the French would have to learn to forgive and love their German enemies, literally as Jesus had taught.
This was Schuman’s genius. He offered an out-of-the-box solution to embrace the defeated foes as equal partners in the European Coal and Steel Community–catching the world totally by surprise.
Solidarity
Schuman wrote that ‘European policy is certainly not in contradiction with the patriotic ideal’, any more than communities and towns challenge the role of the family. ‘The national can flourish within the supranational. The best safeguard for a nation no longer lies in glorious isolation, nor does it lie in its own strength no matter how powerful it is, but in the solidarity of nations who are guided by the same spirit and who accept to work together for the common interest of all.‘
Your objection, Geert, is that Brussels is in trouble because it has been following Schuman’s plan. I agree that all is not well in Brussels–but that’s because it has been ignoring key parts of Schuman’s plan. The process of ‘ever closer union’ had to be slow, transparent and truly democratic, he reasoned. Most importantly, he insisted that the project ‘must not remain an economic and technical enterprise: it needs a soul’.
There are no easy answers in our complex globalised world and you politicians have no easy task ahead. But is it really helpful to turn back the clock by stirring up old patriotic rivalries again? The way forward surely requires what Schuman called the spirit of Europe: being conscious of belonging to a cultural family and to have a willingness to serve that community in the spirit of total mutuality. For, he believed, ‘loving your neighbour as yourself’ was a democratic principle which, applied to nations, meant being prepared to serve and love neighbouring peoples.
Schuman is not your hero, you wrote. That’s a shame, Geert. For he modeled humility and strove endlessly towards Europe becoming a ‘community of peoples deeply rooted in Christian values’.
With this letter I enclose my book Deeply Rooted about this extraordinary politician who is often misunderstood and underestimated. Oh, and by the way, Ronald Reagan– who is your hero–was for, not against, a strong Europe.
Sincerely,
Jeff Fountain
director, Schuman Centre for European Studies

* Geert Wilders is a member of the Dutch Parliament and the leader of People's Freedom Party (PVV).