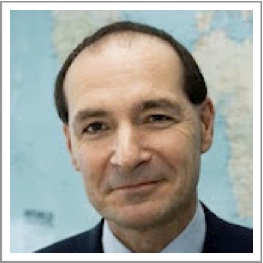 Patrick Dixon is a doctor deeply concerned with the AIDS epidemic and was one of the first Chrisitan activists to do something about it. Wall Street Journal calls him the Global Change Guru. He speaks at the World Economic Forum in Davos and other global summit gatherings.  At heart he is an evangelist.
Englishman Dr Dixon was ranked as one of the top 20 most influential thinkers alive today, in the 2005 Thinkers 50 global executive survey.
Last week in Harpenden, north of London, Patrick addressed the Global Leaders Gathering of YWAM,  exhorting his audience to take hold of their future. That future, he explained, would be Fast, Urban, Tribal, Universal, Radical and Ethical, and unpacked each point in a summary of what he wrote in Futurewise, one of his many books.
The future, he said, would be driven by emotions and passion, not in the first place by technology and innovation. China feared a revolution of an unsettled population, for example. Germany feared hyper-inflation.
Patrick’s own passion is to prepare people for the future. There is an intellectual and philosophical vacuum, he explains; the socialist ideals have gone, the capitalist dream is dead. Both of them have been debunked by today’s harsh realities. What we are left with, he says, is a big question mark about ourselves and our future. There is moral uncertainty and the future will not stop for moral uncertainty.
Foundation stone
When asked in the Q&A time how he would respond to a television presentator inquiring about his stand on same sex marriage, Patrick replied that he was committed to stamping out injustice, inequality and stigma in any guise.
Yet, he said, he shared a deep concern not only with fellow Christians, but with Jews, Muslims, Hindus, most traditional African religious leaders, and many of his Chinese friends, Christian or not.
“As we look at the whole sweep of human history,” he shared, “every society and every culture has been built on one key value: the importance of children. It is the importance of ensuring that when a man and a woman fuse together and become ‘one flesh’, that children are born into a household where the man and woman are still together, and looking after them.
“We call this arrangement marriage. It is such an important foundation stone in society, the root of every family tree. Every human being born on earth, whether or not the parents are still together, has a family tree. These family trees, these unions, have been celebrated by society which usually discourages casual union for the sake of children and cousins and grandparents and great-grandparents.
“The union has been a vital core component of every society in just about every culture throughout all of history. Every culture has an equivalent word for marriage, describing what is usually a great social occasion–equalled only by a funeral–when people get together because they believe this union is the foundation stone of every society.
“If the gay community would like to use that word ‘marriage’ for same-sex unions, and if the laws of our countries are changed to enable them to do so, then there can be only one response: we’ll have to find another word for male-female unions. Because most cultures and most societies would not recognise a union between two men or two women as that foundation stone of society.
Common sense
The whole of human history is defined by parenting. If you don’t have parents, you don’t exist. Prime Ministers may think they have the authority to reorder the vocabulary. But let’s be clear we are are talking about something different. That’s not antagonism towards a particular group; its just a statement of fact.’’
The arguments to change the cultures of the nations were won in the living rooms of the nation, he continued. They were won one by one, heart by heart, ear by ear. People were won by appealing to common sense, that divine instinct that is there. They might not believe in your God but they love your values, he remarked.
On euthanasia, Patrick added, “I don’t want to live in society where every 75-year old woman feels she had to do the decent thing and call that nice young doctor with his little syringe into her bedroom and say goodbye to her friends. I don’t want to live in a society where the elderly are dishonoured and discriminated against. I’m for compassion and understanding. I’m for human dignity. That’s why I want nothing to do with anything that would put pressure on the elderly in our society.”
For more common sense, see www.globalchange.com.
Till next week,
Jeff Fountain