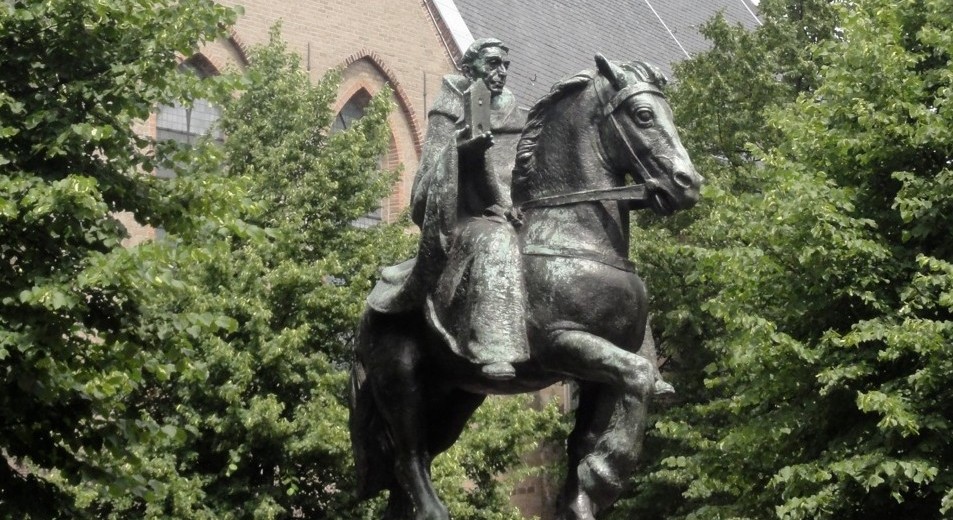 Utrecht was the centre of the cycling world this weekend with the start of the Tour de France. This two-thousand-year-old city is usually the starting point for the Continental Heritage Tour which also got under way this weekend.

For obvious reasons, we avoided the crowds lining the streets as the megastars of cycling sped through the city streets. We first headed north to Friesland in our search for  the ‘faithful minorities’ who shaped Europe through their faith: Boniface, apostle the Germans; Menno Simons, the reformer of peace; the Brothers of the Common Life and Thomas a Kempis, a movement whoch spead from Deventer and Zwolle across northern Europe helping to prepare the way for the Reformation.
So today we visited Utrecht as workers cleaned up after the mass exodus of cyclists and spectators yesterday. In my opinion, this city is the best place in Europe to illustrate how Europe got her soul.
We stood on the square in front of the Dom Church totally dwarfed by the Dom Tower finished in the late 14th century. I told our tour group we would see evidence around us for the conversion of the Copts, the Romans, the Franks, the Irish, the Scots, the Anglo-Saxons, the Friesians, the  Germanic peoples and the Vikings.
Torture wheel
Every Dutch person knows the name of the Hoog Catherijne, the sprawling shopping centre adjacent to the Utrecht Central Railway Station. But I have met few Dutch people who could tell me who this ‘Catherijne’ was. In past centuries, a convent named after a certain St Catherijne was located where the shopping centre now is, before being shifted to a site south of the Dom, now a well-known museum on the Christian history of the Netherlands.
Next door is the Catholic Cathedral of St Catherijne, with a stained-glass window depiction of the saint supporting a torture wheel. As a kid in New Zealand, I was familiar with the firework known as the catherine wheel, a whirling wheel of fire, but had no idea of its origin.
Catherijne/Catherine was a young Coptic woman from Alexandria, a passionate 25-year old evangelist who led the Roman emperor’s wife to faith towards the end of the third century, a time of great persecution of the Coptic Church in Egypt by the Romans. For her efforts, she was tortured on the wheel and eventually executed. Legend says angels carried her body into the Sinai to the site of the famous monastery named after her. Catherijne is evidence therefore of the conversion of the Copts.
St Martin, Utrecht’s patron saint, was a Roman soldier converted by reading the life story of the Coptic monk and hermit, St Antony. The famous tale of him cutting his red officer’s cape into two to give half to a beggar is the origin of Utrecht’s flag and city symbol: a red and white rectangle divided diagonally into two. The shirts of the city’s football club, also divided diagonally into red and white, are reminders of the conversion of the Romans.
Frankish soldiers built the first chapel in the city in honour of Martin–evidence of the Frank’s conversion.
When the Anglo-Saxon Willibrord, apostle to the Friesians, came to the Netherlands from Britain, he  rededicated the chapel to St Martin, the name still associated with the Dom Church. Willibrord was part of the movement of Anglo-Celts which began when Patrick evangelised the Irish, who evangelised the Scots, who evangelised the Angles and Saxons who had invaded Britan after the Romans left.
Viking runes
Willibrord’s co-worker for some years in Utrecht was Boniface, who eventually was commissioned by the pope to head east across the Rhine river to reach the pagans Germanic peoples, a task which he performed effectively thus altering the course of German history.
Rather incongruously, a large stone inscribed with Viking runes stand near the wall of the cloister garden, a silent witness to the conversion of the Norwegians and Danes. It is a copy of the original Jelling Stone in Denmark, telling how King Harold Bluetooth subjected the Norwegians and Danes and introduced them to Christianity. The runes for ‘H’ (Harold) and ‘B’ (Bluetooth – he loved blueberries) are the origin of the familiar Bluetooth icon.
The conversion of these European peoples, and many others from Armenia to Iceland in the first millennium, brought a megashift in worldview from polytheism to monotheism, new understanding about God, man and relationships, and a new way of living. A common worldview, Christian in the broadest sense, laid the foundations for the emergence of European culture and society.
In short, this is how Europe got her soul, her values and her worldview. Tomorrow we go to Amsterdam to learn how Europe lost her soul.
You can follow our tour via regular video updates on the Schuman Centre facebook page. 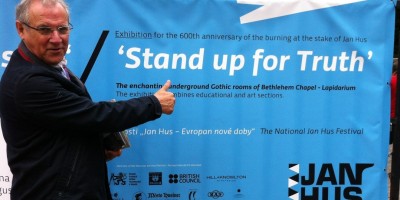 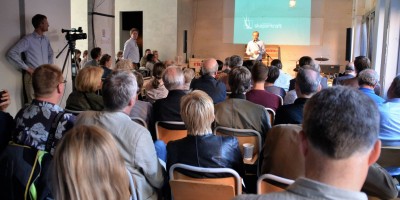