Imagine a network of 70 students and young professionals living in fellowship houses and apartments across the inner city, attending a discipleship programme oriented to engagement with society.

An urban transformation model is emerging in Oslo bridging the gap between talk and walk concerning fleshing out the gospel in public life. While a tension often is experienced in YWAM training communities between teaching about the lordship of Christ in all spheres of life and actual involvement, this experiment led by young Norwegian YWAMers seems to be meeting the needs of younger professionals seeking practional application of their faith in their calling.

Many of them feel their churches are unable to support and stimulate them in their work, being centred on their own programmes. These fellowship groups, however, aim specifically to equip members for engagement in the public square.

Social entrepreneurs
Two of the initiators of this project are Joachim Magnus, son of former YWAM Norway leader Alv Magnus, and Hermund Haaland, founder of the Skaperkraft think tank. Last week Hermund and I met in Oslo to talk about this promising project.

The think tank is one part of an ecology of organisations, activities and relationships aiming to produce ‘social entrepreneurs’ impacting Norwegian society on all sides. Skaperkraft has emerged as one of the three most influential think tanks in Norway, the other two serving liberal-right and socialist-left political parties with budgets eight times as large.

Hermund and his colleagues have chosen to focus on three key issues: human trafficking, reduction of fossil fuel usage, and promotion of awareness of the role of religion in the public square. Publishing regular articles in the daily press is part of their strategy to shape the nation’s thinking, especially that of politicians and decisionmakers. Publications in a popular yet professional format include articles by Christians, Muslims and atheists all addressing an issue together from various perspectives.

‘We aim for a public discourse rather than just getting Christians to talk to each other,’ explained Hermund.
The role of innovation in job creation and nation building was the theme of one such publication with contributors who had created thousands of new jobs in shipping, banking, marketing, media and communications.

Another entitled ‘Gud er tilbake!’ (God is back!) offered a platform for believers and non-believers to take a positive look at the re-emergence of religious belief in public affairs.
In ‘Gud i Grunnloven’ (God in the constitution), writers from diverse backgrounds contributed chapters exploring the role of the Christian faith in shaping Norway’s society, laws and culture.

A key inspirational model from Norway’s past is the story of Hans Nielsen Hauge (1771-1824), topic of the last chapter in the book on innovation. Considered by many to be the father of modern Norway, he experienced a personal spiritual awakening which led to a remarkable evangelistic ministry with widespread impact leading to his imprisonment by authorities threatened by popular movements in Napoleanic times. Yet his work inspired direct innovation in many fields: printing and publishing,  cornmills, paper factories, shipping companies, salt factories, textile factories–all inspired by faith.

A spiritual revolution has happened before. Hermund and his friends want to see it happen again.
Till next week, 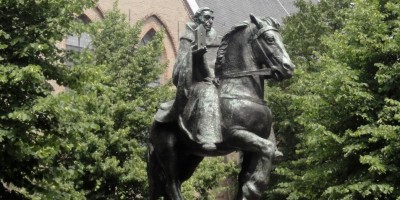