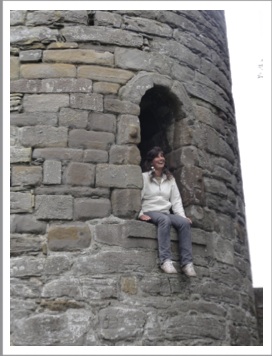 Okay, so you’d love to be with us here in New Zealand right now enjoying the southern hemisphere summer. Well, if it’s any comfort, we are experiencing the tail-end of a cyclone that ripped across the Pacific Island of Tonga last week.

Today it’s grey, rainy and cooler.
As a second-best option, let me suggest you join us for some northern hemisphere summer activities in July and August. Even though a world away, I am busy with preparations for these events, booking accommodation and transportation with growing anticipation of what promises to be another encouraging summer of discovery.
We start with the Celtic Heritage Tour, 28 June–9 July; then we hold a Masterclass in European Studies, 28 July–1 Aug;  and round off the summer activities with the Continental Heritage Tour, 9–24 August.
Last summer for the first time we traced the trail of the Celtic monks, beginning in Ireland where the thoroughly pagan culture was transformed after Patrick’s arrival in the 5th century. This summer, we will again start our journey in Dublin, visiting several ancient monastic sites and learning about aspects of Celtic spirituality still as relevant for our post-modern world today.
Springboards
Some of these sites were springboards for adventurous mission trips, both by sea and land. From Clonfert, for example, Brendon  set sail for North America 900 years before Columbus. From Bangor, Columbanus and his followers headed for France, Switzerland, southern Germany and Italy, setting up communities which over the centuries grew into cities still existing today. From Londonderry, Columba set off in his coracle to settle on the island he called Iona (meaning ‘dove’, as does ‘Columba’). Iona in turn was the launching pad for evangelising the Scots and the Picts (so-called by the Romans because of their extensive body tattoos, i.e. pict-ures).
After flying from Belfast to Edinburgh (and a fascinating guided tour of the Royal Mile from the castle to Knox House), we have to miss Iona (which unfortunately requires a two-day detour) and follow the east coast of Scotland and across the border to England. We drive out across the low tide to another Holy Island, or Lindisfarne, where a community was pioneered from Iona by Aidan, as a springboard for evangelising the pagan Angles and Saxons.
The island is also famous for the Lindisfarne Gospels, richly illuminated manuscripts which survived Viking attacks (Lindisfarne was the first place in Britain ever attacked by the Vikings) and can still be seen in the British Library. The Gospels and the Book of Kells, which we view in Dublin at Trinity College, remind us that our lower case letters (that you’re reading right now) come from the minuscule script developed by these Celtic scribes.
Surprising discoveries continue to await us in Durham (the enormous cathedral), Bede’s World in Jarrow (a truly amazing fellow), Constantine’s city of York, the relatively unknown St Chad, apostle of the Midlands, William Carey’s chapel in Moulton, the university colleges of Cambridge, the spiritual legacy of London from William Tyndale to William Booth, and finally the endpoint of our pilgrimage, Canterbury.
Dynamic
One month later, the Continental Heritage Tour continues on the mainland where we left off in Britain. For we pick up the trail of Willibrord and Boniface who belonged to the next phase of the dynamic Celtic mission movement.
Perhaps too this has been on your ‘bucket list’, as one friend put it this weekend. Romkje and I never tire of learning new things each tour about how God has been at work through all the centuries in Europe–before, during and after the Reformation. Here’s what some of last year’s participants said about the tour: ‘absolutely brilliant and enjoyed every minute’; ‘excellent and very much appreciated’; ‘wonderful tour’; ‘wished we had gone on the tour years ago’…
The other major summer activity is the Masterclass in European Studies, planned this summer for Geneva. Dr Evert van der Poll and I will be the main lecturers for this five day course, supplemented by local experts. The theme will again be ‘the Gospel and the making of Europe’, but with a special emphasis on the development of human rights. The city of John Calvin and Henri Dunant (Christian founder of the Red Cross), as well as Voltaire and Rousseau, offers many stimulating lessons for those wanting to learn more about the interface of the Christian faith and the public square. Students can qualify for study credits.
So write to me soon if you are interested in making your summer dreams come true! (These tours can fill up quickly.)