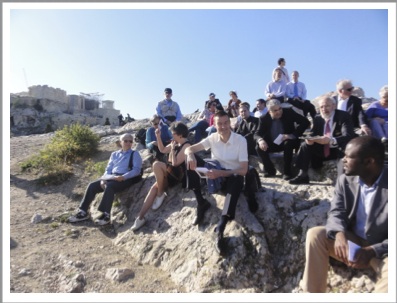 The evening before had been a rich but sobering experience in the grandeur of Athen’s Old Parliament Building. Eighty participants from over twenty European nations mingled with local Greeks under the stately chandeliers for the opening event of the State of Europe Forum.

A panel of activists helping refugees, migrants, Roma and impoverished Greeks shared poignant stories stressing how crisis offered opportunity to touch lives and bring hope. While the national economic picture appeared to be improving, now the crunch was being felt increasingly by the man in the street.
Still pensive with the disturbing input of the previous evening, we had wound our way in the early morning freshness of the following day through picturesque cobbled lanes and stairways at the foot of the Acropolis to gather on the rocky outcrop made famous by Luke’s report of Paul’s encounter with the city philosophers. Spread out along Mars Hill, we took in the awesome panorama of the ancient Agora below, and surveyed the sprawling modern city beyond of over four million inhabitants.
So, this was where Paul had stood two thousand years ago. We read together Luke’s account of how the apostle sowed seeds of what would become a global revolution with profound spiritual, social, political and economic consequences.
Footprints
Dr George Adam of the Athens Greek Evangelical Church led us in a meditation on Luke’s story, posing questions for us to consider in smaller groups about the relevance of Paul’s message for today.
Gerard Kelly, a regular contributor to the forum in past years but forced to be absent this year, contributed the following poem written for the occasion to enrich our meditation:
MARS HILL: A Blessing for the Peoples of Europe...
May the God you have worshipped,
Without knowing his name,
Whisper a word
For you to know him by.
The concealed be revealed to you,
The invisible unveiled,
Untold stories
Be unfolded before you.

May the statues you have sculpted,
In your search for satisfaction,
Be a springboard to new freedoms,
Not a grave to guard your gods in.
May the hunger that has haunted you,
The thirst for joy that hunts you,
Bring you at last to love's great banquet.

May the breath you were born with
In the air that we share
Lead your lungs
To the sky-wide source of being.

And may God,
Who sets the boundaries of kingdoms,
And is active in the history of your tribe,
Show you where his fingerprints
Are scratched into your story,
And where his footprints
Show the pathways into life.

May the maker of meanings,
The Father of all,
Definer of nations,
Designer of life,
Turn his face toward you,
Turn his favour upon you,
Turn your sorrows to dancing:
May he open your people
To his peace.
Responses
From Mars Hill we made our way back to hotel conference venue along the paved way named after Dionysius the Areopagite, Paul’s chief convert of the day, and the city’s patron saint.
The rest of the day was largely spent in working groups seeking biblical responses to today’s crises of economy and migration, and of threats to democracy, solidarity and religious freedom. The perspectives offered by Paul’s message of hope, of the God in whom ‘we live and move and have our being’ and of the resurrection of Jesus Christ, stirred in us hope to strive for a sustainable future of freedom, solidarity, equality and peace.
Till next week,
Jeff Fountain

p.s. Photos, addresses, videos & documents of the forum will be uploaded shortly on www.stateofeuropeforum.eu.