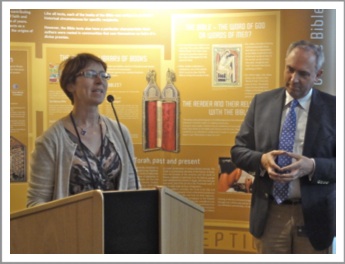 In 28 European nations this week, 400 million voters out of a total population of half a billion have an opportunity to say who they want to represent them at the European Parliament for the next five years. So, why should Christians vote? And how?

These elections are truly unique globally, being pan-European by nature. Yet while the European Parliament is the world's only democratically elected international institution, voters choose for national parties and candidates and voting takes place on different days in different countries. Most voters go to the ballot box next Sunday, but the Dutch and the British vote on Thursday; and Czechs, Irish, Italians, Maltese, Slovaks and Lithuanians on Friday and/or Saturday.
This is the first pan-EU poll since the eurozone debt crisis pushed the currency union to the brink. The European Parliament has gained new legislative powers, the European Commission has more say than ever on national budgets, and this week’s vote will influence the choice of the next President of the commission, yet only four out of every ten voters are expected to exercise their right.
So, why should we as followers of Jesus vote?
Firstly, if we want to see more of God’s will being done in Europe, in politics, in economics, in healthcare and every other field of life, if we are serious about praying the Lord’s Prayer, then we should be serious about exercising our political right to vote. When we don’t vote, we give a double vote to others to promote non-biblical values. And then we get the kind of government we deserve.
If Paul exhorted Timothy to pray for the political leaders of pagan Rome–when believers had no say in the matter whatsoever–how much more should we fulfil our responsibility to choose wise and just leaders.
Dirty
Some Christians see politics as a dirty business, and therefore no place for believers. Yes, it can be a dirty business, which is the very reason why believers should be involved helping to change things.
In recent weeks there have been several attempts to introduce bills into the EP that would have further undermined the remaining fragments of biblical values left in current European law. Christian MEP’s were able to introduce amendments and vote against the proposed leigslation–sometimes winning only by a very narrow margin. There is a battle going on for the soul of Europe.  Christian apathy is capitulation to the wrong side.
We evangelicals by and large have not been encouraged to think deeply and biblically about the public square. We tend to have a residual suspicion of political engagement. Partly that may reflect anabaptist and ‘quietist’ roots, which encouraged separation from the world. Partly it reflects evangelicalism’s irresponsible flight from her own Wilberforce tradition, away from anything looking like the ‘social gospel’. Only since the Lausanne Congress in 1974, a mere four decades ago, has there been a new evangelical consensus for social engagement. Catholics and Reformed Christians, however, have a rich tradition of teaching on social policy and tend to be far more politically ‘savvy’.
Voters often approach such elections as an opportunity to punish national governments. Yet responsible voting calls for a broader vision. Today’s globalised world is so interconnected, and the major challenges facing us today  in environment, economics, defense, social cohesion and more, require more not less cooperation.
Interaction
Each time I visit the European Parliament in Brussels, I am impressed by all the interaction taking place among Europeans of all backgrounds, seeking answers together on all sorts of issues: committees, conferences and working groups, building Trans-European Networks (tens) which make our lives easier in Europe but which we often take for granted. Winston Churchill once said, ‘Jaw, jaw, jaw is better than war, war, war.’
We have inherited an unprecedented political project–one Paul would have envied–which has helped create conditions for peaceful transmission of gospel (1 Ti.2:2). These seven decades of peace since the last world war–an absolute exception in European history–are not to be taken for granted, as recent events in the Ukraine have reminded us.
So how should we vote?
Firstly, vote proactively. Vote for, not against. Watch out for the parasites, parties who exist by stirring discontent but who have no constructive long-term policies for the well-being of Europe, politicians with a gospel of half-truth and fear, setting one group of Europeans against another. As Christians we should choose for solidarity, not nationalistic pride.
Secondly, vote for those promoting Christ-like policies: not only in issues of personal morality but also in economics, migration, environment, development aid, human trafficking, etc. Here in this recent photo, two Christian MEP’s,  Sari Essayah (Finland) and Peter van Dalen (NL), are launching a Bible exposition in the EP building. This week we can help them and others like them make a difference in Brussels and Strasbourg, and across Europe.
Till next week,
Jeff Fountain

0 responses to “Why & how we should vote”