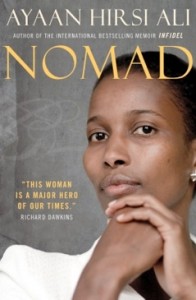 These are surprising words from the Somalian who found refuge in Holland where she became a member of parliament for the Liberals. Her controversial film about Islam led to the murder of her co-producer Theo van Gogh by a radical Islamist on the streets of Amsterdam. Since then she has been forced to live in seclusion and now writes for a conservative American think tank, The American Enterprise Institute, where reportedly she has regular contact with the Bush-Cheney team.

In her new book, Nomad, she continues her campaign against radical Islam. She is presently in Holland promoting her book, which quotes arch-atheist Dawkins on the cover saying: ‘This woman is a major hero of our times.’

Many obviously agree with him as Hirsi Ali has received awards and recognition from numerous western publications and institutions, including TIME magazine (one of the 100 most influential people in the world), Readers Digest (European of the Year), the Danish Freedom Prize, and the Swedish Democracy Prize.

Europe is sleepwalking towards its downfall, she warns, a cultural, ideological and political downfall; because churches neglected the immigrant ghettos.

But there is a solution, she suggests. Mobilise the churches again!

If Saudi-Arabia can invest millions in koran schools and religious propaganda, why not the Catholic Church, with all its wealth and millions of faithful followers?

She says that churches could be active in Muslim communities and offer there the same services that radical Muslims now do, by building schools, hospitals and civic centers, and doing the same civilizing work they did in Africa during the colonization period.

Now, is there any white person who could get away with saying that?!

Westerners have looked on for too long while Muslim scholars won souls, she continues. Churches of all persuasions must enter the competition of systematic religious propaganda with Islam, to curb its growth.

Churches sould revive such Christian institutions as schools, Christian volunteers in urban neighbourhoods, and the spreading of the Christian message!

The West is losing the propaganda war, she says, and the Church can help Muslims assimilate. Motivating immigrants to adopt Western values has been neglected for too long. European leaders–including church leaders–have for decades neglected to take the newcomers into their flock.

"It's maybe paradoxical to call in the church, while advocates of the enlightenment always fought the Vatican,” writes Hirsi Ali, “but Christianity has changed and the Church has become a much more tolerant institution."

Muslims don't need to give up their faith to assimilate, she allows. They can pray, keep Ramadan and other Islamic practises.  But they need to give up the social-political side like Jihad, Sharia, the oppression of women, intolerance against homosexuality or those born Muslims but who want something else.

“In my opinion,” she was reported as saying, “many Muslims are searching for a God that answers to the description of the Christian God. Instead they are being given Allah.”

Those Muslims who want to believe in a Creator and eternal life should choose for Jesus as their spiritual leader, she suggests.

So, church, what will we do with this surprising challenge?