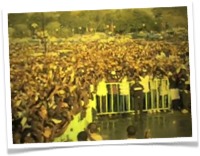 If New Zealanders focussed on spiritual fitness as much as they do on physical fitness, this land would experience continuous revival. Yesterday, 40,000 participated in the ‘Round the Bays’ run in Auckland city, reputed to be one of the world’s biggest sporting events. Imagine that crowd engaging together in spiritual exercise!

In reality, such spiritual activity on an even bigger scale has been happening this past month in Haiti.

Following the massive earthquake that devastated the country, killing 210,000, injuring 300,000 and displacing 1.2 million, the United Nations reported a month ago that Haitians entered a ‘symbolic three days of reflection: on the destruction of their homes, their towns and their capital city’.

Less politically-correct versions of the same event described Haiti’s President Préval as calling the nation to three days of prayer and fasting, in place of the traditional Mardi Gras celebration of revelry and feasting.

Only five days before the Mardi Gras was scheduled to begin, the president invited the people to join him in humbling themselves in prayer for forgiveness and healing, in front of the damaged presidential palace. No one could predict how many would respond to this call on an island steeped in the tradition of voodoo.

What transpired, however, resembled an Old Testament scenario.

Rev Calvin Lyerla, from Florida, describes the scenes he saw in the capital, Port-au-Prince on this YouTube video: CLICK HERE

On February 12, as the day began to break, more people than the eye could see were gathered in that downtown area.  Standing wiith arms extended to heaven, desperate Haitians cried out to God to forgive and heal their land. There must have been one million or more people filling that downtown square. Some had climbed trees, some were sitting on rooftops or on automobiles.

From 6am to 6pm, each day for those three days they came.  Scriptures were read, prayers were prayed, songs of worship were offered up, declarations of repentance were made. The prime minister arrived early the first morning and stood weeping for over an hour. Later the president led the people in prayer, calling upon God to heal his country. Here was a nation brought to its knees, and God was pleased.

Some 3000 conversions were recorded that day, including over a hundred voodoo priests.

Voodoo is one of Haiti’s two official religions. African slaves brought this animistic faith with them, and generations later many Haitians still believe their fate is controlled by spirits needing appeasement through voodoo rites.

Despite receiving billions of dollars in aid, Haiti remains the least developed nation in the western hemipshere. Development experts blame voodoo as a major obstacle to progress in Haiti as well in as parts of Africa. Without  ethical content, voodoo remains deeply influential even among educated Haitians.

The Wall Street Journal quoted one missionary who had lived for 20 years in Haiti as saying:

"A Haitian child is made to understand that everything that happens is due to the spirits. He is raised to externalize evil and to understand he is in continuous danger. Haitians are afraid of each other. You will find a high degree of paranoia in Haiti.”

Others report a spiritual transformation across the nation since the earthquake. People from many spiritual backgrounds, including voodoo, are becoming Christians.

Stories continue to surface about miraculous survivals.  The  widely-reported news of the 28-year-old rice vendor who was found alive after 27 days under the rubble generally failed to report his story that a man ‘in a white coat’ had brought him water. A five-year-old boy, trapped for three days, told his mother that an old man had given him food, water and crackers every day.

YWAM teams are among the many NGO’s active in helping Haiti recover from this national disaster. Workers from RescueNet, a YWAM rapid-response team, helped rescue a man who had been buried for 12 days. Others help rebuilding projects and provide ready-made meals. Marine Reach delivered a mobile medical clinic truck.

Unlike a James Bond cocktail, Haiti is a nation shaken and stirred.