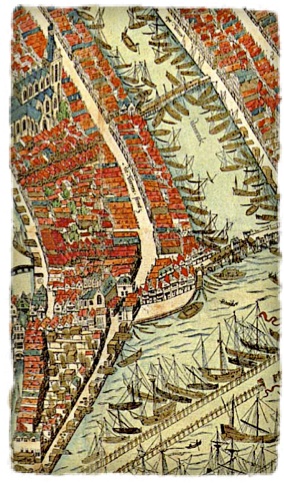 Twenty-five of us crowded into the Dwaze Zaken arts cafe a few days ago, at the point where the River Amstel flowed out into the Zuider Zee. We were about to set out on a walk through the oldest parts of Amsterdam (formerly Amstelredam–dam on the Amstel) to trace the story of Europe from medieval to modern times.

For this fascinating city has so carefully preserved its original character dating back to at least the 17th century, and in parts, to the 13th century. A walk through the old city takes one from feudal times through the Renaissance to the Reformation, and on into the Age of Discovery and the Enlightenment.

‘We‘ were participants of the Evening School of European Studies, meeting every second Thursday in Amsterdam for classes, as well as others following the course online in Holland and Belgium, plus some interested friends and relatives.

Satisfied by one of Dwaze Zaken’s renowned lunches, we stepped out onto what was the earliest port of the former fishing village that grew up around the river’s outlet.

The Zeedijk used to be a path on top of the dijk that protected the town from the sea. At the start of the street is one of Amsterdam’s oldest wooden houses, dating back to the 16th century. Guidebooks tell us that this inn was called t Aepgen, old Dutch for The Ape, named after the owner’s flea-ridden pet monkey. Sailor-lodgers would be scratching themselves for days afterwards, prompting the Dutch saying: Hij is in de aap gelogeerd–meaning, ‘he’s got problems’.

Passage
The story of Amsterdam’s global impact begins in St Olof’s chapel right opposite the inn. One May day in 1578, the Amsterdammers threw out their Catholic city fathers and embraced the Protestant faith. Like many other sacred buildings in the city, the chapel was then given over to multiple purposes, both holy and profane.

Here in this chapel, directors of the United East Indies Company (VOC) had listened to the theories of a fiery Calvinist preacher and leading mapmaker, Petrus Plancius, that a north-east passage to Asia existed over the top of Russia that would enable the Dutch to outflank and out-trade the Catholic Spaniards and Portuguese in Asia. That led directly to the contract with an English captain named Henry Hudson to search for this passage.

In 1609, Hudson set sail from the tower on the former sea wall a short walk from the chapel, to discover–after a radical change of plans and course–the Hudson River and Manhattan Island. This event and the subsequent establishment of a Dutch fort there called Nieuw Amsterdam, later New York, is commemorated by a bronze plaque on the tower.

Right opposite the tower lay the city’s early shipbuilding yards, which with urban expansion got pushed further east. The vessels built here formed the world’s largest shipping fleet which soon would carry fully half of Europe’s merchandise. We walked along canals past warehouses reminding us of such cargoes of tobacco, spices, diamonds, pirated treasures, wine, grain, timber, furs, gum, ivory, sugar–and slaves.

The courtyard of the world’s first limited company and multinational, the VOC, took us back to when it, along with her sister company, the West Indies Company, catapulted the city into wealth and influence. Amsterdam itself was fast becoming the New York of the 17th century–cosmopolitan, confident, competitive and colourful, the commercial hub of a powerful, rich, global, trading empire, complete with a pioneer stock exchange and international exchange bank.
Fortresses and outposts of this empire birthed other cities like Cape Town and Djakarta. Amsterdam’s swampy origins also inspired the Russian czar Peter the Great to build St Petersburg as Russia’s gateway to the West, after working incognito in the shipbuilding yards.

Tolerance
Freed from the yoke of Spanish empire and Papal hierarchy, this jewel of the young, independent, Protestant Dutch republic developed the climate of tolerance that has characterised the city ever since. The multi-cultural, tolerant, artistic and intellectually invigorating climate attracted refugees, traders and thinkers from across Europe.
We walked along the former Jewish sector where Iberian Jews had found a refuge from the Spanish Inquisition, only to be rooted out during the tragic Nazi era. Hugenots and English non-conformists worshipped freely here, the latter being inspired by Mennonites to start in Bakkerstraat, in 1609, what is now the worldwide Baptist church movement.
As we traced our progress using a 1544 map, we noted some 20 monasteries and convents that had shaped the early city. The Reformation, or Alteratie in 1578, began a steady secularisation process as all these buildings, as well as churches and chapels, were taken over by Protestants or turned to secular use as hospitals, orphanages, the VOC, armouries or nursing homes, and eventually university faculties, museums and libraries. A few remaining chapels and street names like Monk Lane, Bethany Street, St Anne Street, St John Street, St Petersgate Lane, St Agnes Street and Prayer Without End (!) still witness to this era.
The Pilgrim Fathers came to worship in one such converted chapel in the Begijnhof, one of Amsterdam’s oldest enclosed courtyards, at first attracted, then repelled, by the city’s tolerance. They chose to follow in Hudson’s wake in search of a new world.
Truly Amsterdam in many ways helped birth the modern age. And with all her contradictions, she remains a leading player in key issues facing Europeans today: secularism, Islam, new spirituality and globalisation. These issues will be our focus over the following weeks in the Evening School.
Till next week,
Jeff Fountain

0 responses to “Womb of the modern world”