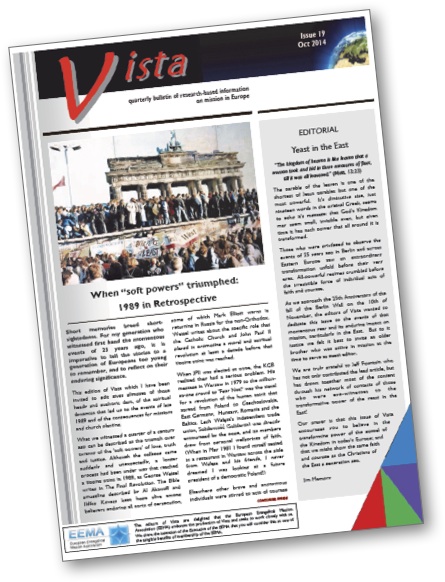 The events of 25 years ago in Berlin commemorated with sound and spectacle this weekend came suddenly and unexpectedly. Yet a revolution of the human spirit had been underway for at least decade which led to the triumph of the ‘soft powers’ of love, truth and justice over tyranny.
Recently I was invited to guest edit a special edition of  the missions research bulletin Vista, reflecting on those heady and euphoric days, the spiritual dynamics that led up to the drama of late 1989 and on the consequences for missions and church planting in Eastern Europe.
This ww is an edited version of my lead article in Vista, a publication of Redcliffe College in Gloucester, one of the very few places offering an MA in European Mission Studies. Long time friend and ywam colleague, Al Akimoff, shares stories of the unbelievable changes he witnessed in Prague, Moscow, Albania and other places. Ildiko Kovács writes about smuggling Bibles into Russia from her native Hungary when she was 19, Bibles which fostered hope among believers enduring all sorts of persecution. A review of George Weigel’s The Final Revolution highlights the specific role the Catholic Church and John Paul II played in promoting a moral and spiritual revolution at least a decade before the tipping point of 1989 was reached.
You can download your copy of Vista here.
Courage
Following Weigel’s argument, when JPII was elected as pope, the KGB realised they had a serious problem. His message in Warsaw in 1979 to the million-strong crowd–‘Fear Not!‘–was the signal for a revolution of the human spirit that spread from Poland to Czechoslovakia, East Germany, Hungary, Romania and the Baltics. Lech Wałęsa’s independent trade union, Solidarność (Solidarity), was directly encouraged by the pope, and its members drew from personal wellsprings of faith.
Elsewhere other brave and anonymous individuals were stirred to acts of courage and resistance. In Lithuania for example, during Stalin’s Soviet occupation, hundreds of thousands were deported to Siberia. In 1956, after Stalin’s death, returning Lithuanians erected crosses on a small hill in gratitude and to remember those who would never return. The hill became a place of prayer for those still suffering. In 1961, the authorities bulldozed the Hill of Crosses, declaring it a place of ‘ignorance’. Somehow, new crosses kept appearing overnight.  Attempts to flood the area, block the roads, and turn the hill into an inaccessible island, all failed over time. More crosses just kept appearing. Finally in 1985, the government abandoned their hopeless task. Today hundreds of thousands of crosses cover this 10-metre high hill; some even say millions!
In Leipzig, East Germany, the Nicolaikirche became the centre of the Prayer for Peace movement during the 80’s which swelled into street marches of 70,000 on October 9, 1989, demanding truth and justice. The marchers responded to armed and violent police provocation in a spirit of peace, love and forgiveness. One month later the wall was demolished.
The Pan-European Picnic that took place on the Austrian-Hungarian border August 19, 1989, when 600 picnickers burst through a gate to cross over to the west, was seen as the ‘pin-prick that burst the communist balloon’.
Forgiveness
Leading the Velvet Revolution in Prague, Vaclav Havel took as his slogan the words of reformer-martyr Jan Hus from 1415, ‘Truth prevails’, making it the motto of the Czech Republic. The sudden overthrow of the Ceaușescu dictatorship, when thousands of Romanians knelt in the city square to pray the Lord’s Prayer, and then chanted ‘God exists, God exists!’, is yet a further example of the triumph of the soft powers.
In September 1988, one third of all Estonians participated in a massive song festival, singing forbidden national songs in what became known as the Singing Revolution. The following year, two million people joined hands to form the Baltic Way, a human chain 600 kilometres long spanning the three Baltic states.
Four decades earlier, another event inspired by the ‘soft powers’ of Christianity, of forgiveness and reconciliation with one’s enemy and of love for God and neighbour, had led directly to the founding of the European Coal and Steel Community, and thus to the EU.
Robert Schuman’s announcement of his plan on May 9, 1950, is, in my judgement, the defining moment of post-war European history, more significant even than the events of November 9, 1989, when the wall came down. For the latter would not have happened without the former. The success and attractiveness of the European project gave hope and aspiration to millions of central and eastern Europeans.

0 responses to “When 'soft powers' triumphed”