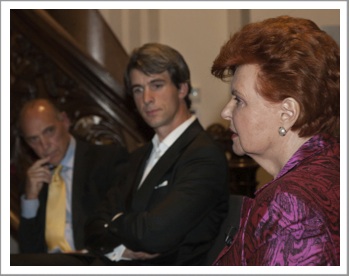 If Europeans studied their history, they would count their blessings, realise they were freer and better off than at any other time of history and would therefore not despair and complain.

Delivering the annual Europe Lecture in The Hague last week, the 76-year old former president of Latvia, Dr. Vaira Vīķe-Freiberga, drew these conclusions speaking from a lifetime of experience. That started when she fled with her parents as the Red Army ‘liberated’ her Nazi-occupied homeland in 1944, and wiped it off the map.

After years in refugee camps in post-war Germany and then in French Morocco, her family had settled in Canada, where later she served as a professor at the University of Montreal for 33 years. Dr. Vīķe-Freiberga maintained a close interest in her native country. Returning after the collapse of the Soviet Union, she gave up her Canadian citizenship to become president of Latvia from 1999 to 2007.

Encouraging a wide range of economic and social reforms, she oversaw a growing economy, reduced corruption and the strengthening of democratic institutions. Throughout her term of office, she enjoyed an almost unique approval rating of 70-85 percent and brokered the accession of Latvia to both the EU and NATO in 2004. Recipient of nearly a hundred honours, awards, honorary doctorates and orders of merit of the first class, Dr. Vīķe-Freiberga was an official candidate for the post of UN Secretary General in 2006.

The year 2014 had been one of unsettling developments, Dr. Vīķe-Freiberga began, seated on the platform in the cavernous Kloosterkerk. To gain a clearer understanding of where we stood today, she said, we needed the perspective of history, and proposed to go back two centuries to the 1814 Congress of Vienna. That gathering of Europe's leaders did not usher in a century of peace as was sometimes claimed. For the very following year saw Napoleon return from exile at the Battle of Waterloo. 1848 was a year of revolutions across Europe; then came the Crimean War (1853-6), Russia's war against Turkey (1877-78) and later against Japan (1905); not to forget Bismarck’s war against France in 1870. The outbreak of the First World War in 1914 could even be seen as the result of the Congress of Vienna, she suggested.

The next great gathering of leaders, held at Versailles, resulted in anything but the intended enduring peace. European intellectuals then allowed themselves to be seduced by the ideologies of marxism and fascism resulting in massive devastation, destruction and death. While WWI delivered unprecedented loss of military lives, the WWII that followed yielded unprecedented loss of civilian lives.

Continuing her survey in 1945, Vīķe-Freiberga noted that peace had been established along with freedom and democracy–at least on half of the continent. An idea was born that instead of killing soldiers and civilians, collaboration, cooperation, discussion and debate could reach common solutions. Wise men like Robert Schuman and Jean Monnet constituted the European Coal and Steel Community, a whole new way of inter-state cooperation. In hindsight, she observed, Western Europe’s peace and stability had seemed like a fairy-tale.

These ideas became a magnet until the Berlin Wall, communism and the Soviet Union all fell. Countries were now revealed on the map that had been steamrolled by the will of another power. This illegal occupation had remained unchallenged for the sake of global stability and ‘good relations’. Neighbours like the Swedes had ignored the realities of Baltic nations for the sake of business and neighbourly relations (with Russia). Now the Balts needed to get the rest of Europe to recognize and accept them, she explained. This had not been an infringement of the rights of Russia, or aggression to the Russian Federation, as President Putin saw it, she argued. ‘No one invaded us from western Europe. We knocked on the door.’ That was the glaring difference between the Soviet Union and the EU, she stated.

Now other countries wanted this recognition. The signing of an association agreement between the Ukraine and the EU had started the current violence there. The events of 2014, when sovereignty, treaties and territorial integrity had been trampled upon, revived nasty memories of 1914 and 1814. EU citizens faced a choice if they wanted their children and grandchildren to inherit this unprecedented peace, she warned. There was no guarantee that any system would continue. Peace and security required defence systems that could not be neglected, she stressed.

While democracy and capitalism needed serious overhauling, Europeans needed also to realise the great assets and resources they still had. She told her audience to remember their blessings in the light of the past 200 years, and not to despair or complain: ‘You have the privilege of making Europe what it can and should be.’