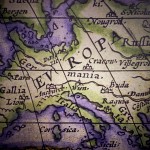 Last week we wrote about how we needed our memories jogged about the roots of western society. Last Friday, it seems the President of the European Council, Dr Herman van Rompuy, set out to jog the memories of Holland’s political establishment at a breakfast in De Wittenburg Castle.
The European continent, he reminded his audience, had  spiritual foundations. So also did the European Union. It was not started as a vehicle for economic prosperity, as commonly assumed. It was a response to the greatest barbaric experiment the continent had known, he argued, the atrocities of the Second World War. It grew out of the post-war reconciliation between France and Germany.
He categorised this movement of reconciliation and forgiveness as a ‘soft power’, a reaction to nazism. Communism was also eventually overcome by these ‘soft’ values, he suggested.
The cost had been very high: tens of millions died. More genocide occurred in the Balkans twenty years ago, but now even those nations are moving towards joining the European perspective of unity.
Van Rompuy saw European values as distinct from Anglo-Saxon, Chinese or Russian perspectives. He contrasted the values of solidarity, social justice and cohesion with the ambition for economic growth. Developments in Europe had earned respect all around the world, he claimed.
Trust
The basis for cooperation in Europe was social capital, with trust at the heart. Solidarity came from within, he said, from the heart.
But the opposite of trust was fear.  He warned against the rise of populism, by which insecure people created enemy caricatures. The portrayal of an inferior enemy gave insecure people as sense of self-worth. People today demand rights for themselves and duty from others. Populist politicians played on this, he warned, and appealed to fears. Followers let themselves be led by fear, which was the reverse of hope.
Van Rompuy pleaded for the promotion of harmonious relations in society, and suggested transcendental values were necessary for the promotion of empathy.
That forgiveness and reconciliation still pointed the way forward for Europe was the clear message of the president, who is himself a devout Christian and regularly attends spiritual retreats.
I was encouraged to hear a direct report of this event from a friend who attended. But it raised several questions in my mind.
One, why is the true story of the spiritual roots of both Europe and the EU not widely taught today?
Two, where is leadership being trained with a European perspective, especially among Christians?
Three, what can we do now about this double lack of biblical literacy and kingdom vision for Europe?
Puzzled
It puzzles me why Europeans seem to find it so hard to think ‘European’. Americans working in Europe generally are much better at seeing the big European picture.
It puzzles me also that in a continent full of all sorts of museums, I have yet to find one museum dedicated to the story of how the Bible, a totally unique book in human history, has had such an overwhelming influence on the course of European history.
Redcliffe College in Gloucester, England, and the Evangelical Theological Faculty in Leuven, Belgium, both offer great courses in European studies from Christian perspectives. But that’s a drop in the bucket.
As the Schuman Centre, we want to address this need. Starting next month, we are offering an Evening School in European Studies, held in Amsterdam on Thursday evenings every second week through to next April. The aim of this course is to enable those with jobs or other study:
• to understand how the Bible’s message shaped Europe’s foundations;
• to explore biblical responses to major influences in Europe today, including secularism, Islam, new spirituality and the EU;
•  to investigate our task–as ‘people of hope’–in shaping Europe’s future.
Next week, we’ll tell you the details of this course and how you can be part of it.