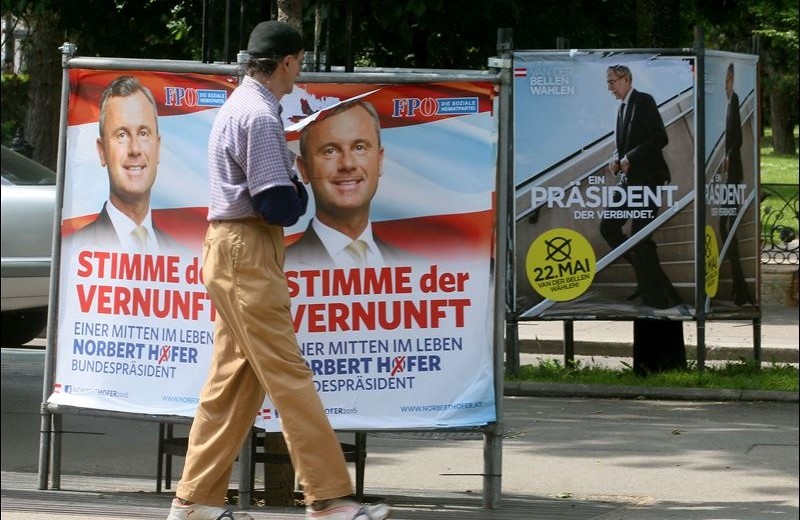 The smiling face of the extreme-right presidential candidate, Norbert Hofer, here and there embellished with swastikas on his forehead, beamed out from posters all over Vienna as I drove through the city this weekend.

Austrian voters who went to the polls yesterday to decide whether they wanted a populist president from the Freedom Party or the green-left alternative, Alexander Van der Bellen, were split almost exactly half-half at the end of the day. Postal votes would determine the final outcome expected later today.

Centre-party candidates had been eliminated in earlier rounds of voting, so that for the first time since the war, Austrians faced the prospect of an extreme-right president. For many, particularly Christians, the choice of two less desirable candidates posed a dilemma–one becoming common across a Europe where the political centre seems to be collapsing. Anxious Austrians asked me this weekend when I was in Vienna for speaking engagements for whom should they vote? As if I was an expert on Austrian politics!

This question in a different form is confronting the British too this coming month. (Not to mention the looming US presidential elections which most Europeans find simply bewildering.) All over Europe, the populist tide is rising after decades of dominance by centre-right or centre-left parties. Sometimes those parties even crossed the line and adopted traditional positions of their opposition, as did Tony Blair with his New Labour movement.

But those days have faded into the dim, distant past. Widespread dissatisfaction, cynicism and rejection of traditional elites in politics, business and banking is creating a public prepared to be ruled by those prepared to use harsher measures to exclude the foreigner and close ranks with ‘our own’.

As never before, nationalist populist parties are more active and more influential, raising major questions about tomorrow’s Europe. Nigel Farage with his UKIP party stands a good chance of seeing his wish fulfilled for Britain to leave the EU. The True Finns have won a place in their government while the Danish Peoples Party support the government from the sidelines, thus shaping policy without responsibility, as did Geert Wilders in the Netherlands some years ago with his Dutch version of the Freedom Party. Meanwhile in France, Marine Le Pen is savouring the prospects of the demise of President Hollande’s electoral support at the next presidential elections.

Sixteen years ago, when Jörg Haider led the same FPÖ (Freedom Party of Austria) into the Austrian government, there was widespread reaction from across Europe. Diplomatic relations with Vienna were frozen. Sanctions were imposed by all the other members of the EU in protest at Haider’s open admiration for Hitler’s Waffen SS, his anti-immigrant views and Euroscepticism.

Now representing the same party, the anti-immigrant, nationalist, Eurosceptic Hofer hopes to become the first extreme-right president in the EU. He is known to sometimes wear the blue cornflower, an old clandestine Nazi symbol for pan-Germanism. A call for sanctions and frozen relationships from the rest of Europe, however, is most unlikely in today’s mood. Is this a shift to far-right thinking? Perhaps it is more a widespread dissatisfaction with the centre parties’ handling of the multiple crises of economics, unemployment and immigration.

What does this all mean? Firstly, that unless leadership comes forward to capture the public imagination with (biblical) values of human dignity, the common good, compassion, equality and freedom for all, we are heading down a long, bumpy, maybe even stormy road to no-one knows where. Perhaps a return to a Europe made up of competing and squabbling nation-states, the cause of two world wars. The populists are right in this sense: the current leadership has failed us, serving up a vision of European life based on material and economic prosperity. Robert Schuman warned us a long time ago that this European project was not just economic and technical. It needed a soul. It needed spiritual values.

Secondly, it means that too often we Christians have also failed our fellow Europeans. We have offered too little towards the shaping of tomorrow’s Europe. Too often we have offered answers to questions people are not asking, but not to the questions they are asking. We have hard work to do. How do spiritual values apply to the hard questions of life? To unemployment? To TTIP? To surrogate motherhood? To refugees and migrants seeking to share in our security and prosperity?

But where do we begin to think about these issues and to find biblical perspectives on Europe today? One concrete opportunity is the Masterclass in European Studies the Schuman Centre is running in Leuven, August 2-7.  Sadly, this is one of the few places I know where we can begin to ask these questions on a European level. Surely these questions are far too important to leave to the politicians!

See you in Leuven? 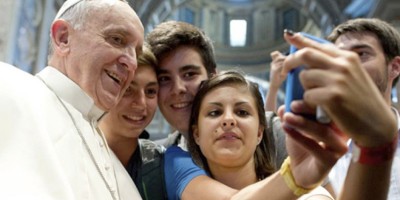 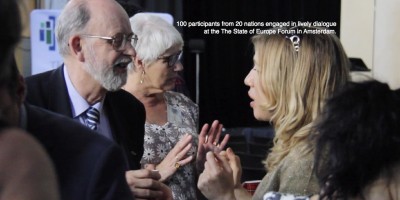